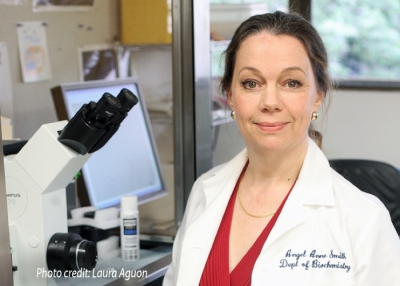 PBRC researcher Dr. Angel Yanagihara has developed a therapy that blocks the burning sting of the Hawaiian box jellyfish. This therapy also blocks the venom of more deadly jellyfish stings such as the Australian box jellyfish, preventing cardiac arrest or even death.  This therapy comes after years of research and effort spent towards understanding and deconstructing the box jellyfish venom.  These efforts led her to the identification of a pore-forming toxin, found in all box jellyfish, that creates pores in red blood cells and muscle cells and is responsible for the cardiovascular collapse seen in some sting victims.  By identifying the toxin responsible, Dr. Yanagihara was able to develop a zinc-based compound, zinc gluconate, that can block the toxin's effects in in vitro tests on human blood and in a live animal model.  The technology is protected under multiple international and U.S. patents and has been licensed by Waterlife Research, which will be performing clinical trials to ultimately bring the product to market.

Dr. Yanagihara has also developed a topical sting treatment containing the toxin inhibitor that can be applied to treat box jellyfish stings. This topical treatment was used to aid swimmer Diana Nyad in her most recent attempt to swim the 103 miles between Cuba and Florida.
Her findings are published in the December 12 issue of PLOS ONE, a peer-reviewed, open-access scientific journal published by the Public Library of Science.
< Previous Article Next Article >
Tweet
back to top