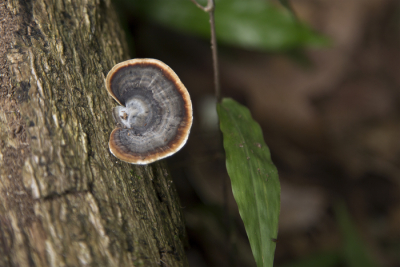 The research team conducted a near-complete census of all environmental substrates and possible hosts to microbes within Waimea Valley watershed. Shown here is a fungus. UH Foundation

Microbes are found in nearly every habitat and organism on the planet, where they are critical to host health, fitness, and metabolism. In most organisms, few microbes are inherited at birth; instead, acquiring microbiomes generally involves complicated interactions between the environment, hosts, and symbionts. Despite the criticality of microbiome acquisition, we know little about where hosts’ microbes reside when not in or on hosts of interest. Because microbes span a continuum ranging from generalists associating with multiple hosts and habitats to specialists with narrower host ranges, identifying potential sources of microbial diversity that can contribute to the microbiomes of unrelated hosts is a gap in our understanding of microbiome assembly. Microbial dispersal attenuates with distance, so identifying sources and sinks requires data from microbiomes that are contemporary and near enough for potential microbial transmission. Here, we characterize microbiomes across adjacent terrestrial and aquatic hosts and habitats throughout an entire watershed, showing that the most species-poor microbiomes are partial subsets of the most species-rich and that microbiomes of plants and animals are nested within those of their environments. Furthermore, we show that the host and habitat range of a microbe within a single ecosystem predicts its global distribution, a relationship with implications for global microbial assembly processes. Thus, the tendency for microbes to occupy multiple habitats and unrelated hosts enables persistent microbiomes, even when host populations are disjunct. Our whole-watershed census demonstrates how a nested distribution of microbes, following the trophic hierarchies of hosts, can shape microbial acquisition.