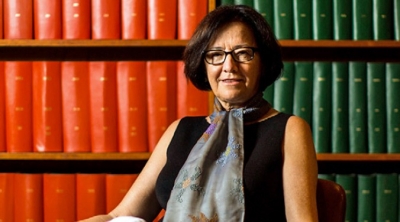 Margaret McFall-Ngai, professor and director of the Pacific Biosciences Research Center, is the only woman at the University of Hawaiʻi who is a member of the National Academy of Sciences. In her inaugural article published this week in the Proceedings of the National Academy of Sciences, commemorating her induction into one of the country’s most distinguished scientific groups, she and a team of researchers reveal a newly discovered mechanism by which organisms select beneficial microbes and reject harmful ones.

The internal microbial communities, or consortia, of mammals, such as humans, are complex in that they require many bacterial types for healthy function. Tissues in the respiratory system, the Fallopian tubes, and the Eustachian tubes are lined with cilia—microscopic hair-like structures that extend out from the surface of many animal cells. A central role attributed to these ciliated tissues is to effectively clear out toxic molecules and undesirable microbes; in work performed largely by Janna Nawroth (now at Emulate, Inc., Boston) and co-led by McFall-Ngai and Eva Kanso, a mathematical modeler at the University of Southern California, these ciliated tissues are shown to also selectively recruit beneficial microbes, called symbionts.

“A few years ago, when the biomedical community discovered that all of these surfaces of mammals have a rich co-evolved microbial consortium, a microbiome, that promotes the health of those systems, the question became: how do they do it—that is, by what mechanisms do they select the good microbes and reject the harmful ones?” explained McFall-Ngai.