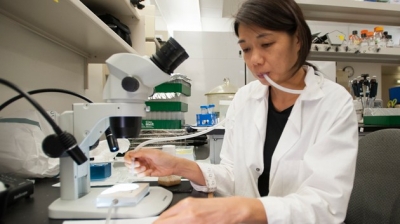 a new and effective way to control insect pests that are a threat to agriculture and humans. Yew and her team

identified a gene in vinegar flies responsible for the insect’s waterproof coating, which provides them protection

from microbes and environmental stress. They named the gene spidey and announced the findings in a recently


Spidey is important for regulating levels of a steroid hormone, which maintains wax-producing cells. This hormone

was already known to play a crucial role in the development and metamorphosis of fly larvae. The researchers did

not expect that steroid hormones would play such a central role in maintaining adult tissues, such as the wax-

producing cells. Yew and her colleagues now plan to knock out spidey in pest species like Oriental, Mediterranean

and melon fruit flies, which are a major threat to agriculture, and possibly mosquitoes, which can carry human

diseases, to see if they lose their waterproofing ability like the vinegar flies.