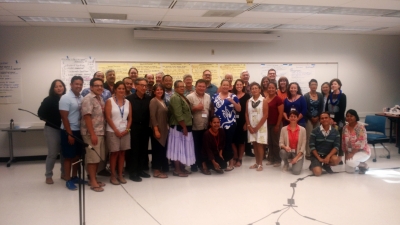 Recognizing and removing barriers to STEM education for Native Hawaiians and Pacific Islanders.

With support from a National Science Foundation grant, the Pacific Biosciences Research Center at UHM hosted a two-day workshop on June 1 and 2, 2016 to explore, in depth, the causes underlying the large disparity in numbers of Native Hawaiians and Pacific Islanders (NHPIs) vs. the general population of the U.S. participating in both college-level education in science, technology, engineering and mathematics (STEM) and in STEM careers. Thirty-one participants, mostly college faculty members, included representatives from the Commonwealth of the Northern Mariana Islands, Guam, the Republic of Palau, the Federated States of Micronesia, the Republic of the Marshall Islands, American Samoa and Hawaii. The workshop began with invited lectures on a successful minority-training program at the University of California Berkeley and mechanisms to evaluate minority training and retention in STEM, followed by a very successful panel presentation with representatives from each of the seven island groups present.  The panel comments were focused on barriers to participation from causes as diverse as cultural differences, geographical distances, and financial disparities at many levels. The second day of the workshop explored reducing, eliminating and overcoming the barriers.  A National Science Foundation program officer, present throughout the workshop, declared it important and unique.

Read the report on the workshop efforts and recommendations.

Following introductory remarks by the convener and special lectures by two invited specialists in minority STEM education, a panel of participants drawn from each island group presented perspectives on barriers to STEM education in their home islands.