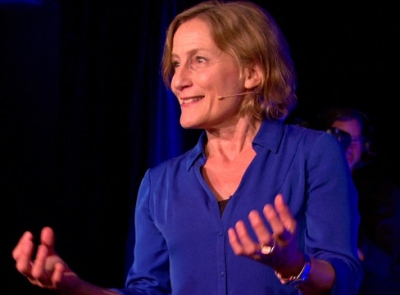 “The Art of Harnessing Chemosynthesis: The remarkable diversity of symbioses between marine invertebrates and chemosynthetic bacteria.”

Nicole Dubilier was born in New York, moved from the USA to Germany as a teenager and gained her PhD in Marine Zoology at the University of Hamburg. After a two-year postdoctoral fellowship at Harvard University, she joined the Max Planck Institute for Marine Microbiology in 1997. Dr. Dubilier’s lab studies the diversity, ecology, and evolution of symbioses between bacteria and marine invertebrates from chemosynthetic environments such as deep-sea hydrothermal vents, cold seeps, whale and wood falls, upwelling regions, and coastal sediments. Her group uses a wide array of methods to study chemosynthetic symbioses that range from deep-sea in situ tools to molecular, 'omic' and imaging analyses. Dr. Dubilier's recent awards and honors include the Leibniz Prize in 2014 (Germany's most prestigious research prize), a Gordon and Betty Moore Marine Microbial Initiative Investigator Award in 2013, and a European Research Council Advanced Grant in 2013. She was elected a Fellow of the German National Academy of Sciences (Leopoldina) in 2015, of the American Academy of Microbiology in 2013 and is the Chair of the American Society of Microbiology General Meetings in 2016 and 2017. From 2011 – 2014 she was the head of the graduate program Symbiomics, a European Initial Training Network focused on symbioses between invertebrates and bacteria.