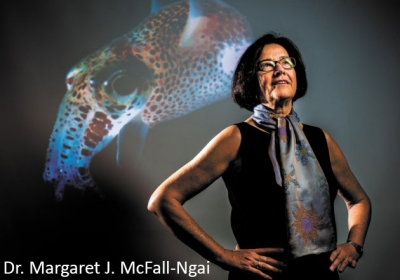 The Pacific Biosciences Research Center (PBRC) is very pleased to welcome three new faculty members: Drs. Joanne Yew, Margaret McFall-Ngai, and Edward (Ned) Ruby.  Dr. Yew joined PBRC on April 7, 2015 from the Temasek Life Sciences Laboratory and the National University of Singapore.  Drs. McFall-Ngai and Ruby are returning to PBRC after spending ten years at the University of Wisconsin, Madison.  Margaret and Ned will start officially at PBRC on July 1, 2015.  Simultaneously, Margaret, a recent National Academy of Science appointee, will become the permanent Director of PBRC.

Dr. Yew’s laboratories are located in the Békésy Laboratory for Neurobiology, PBRC, on the main University of Hawai‘i at Mānoa campus.  Dr. Yew’s research is aimed at understanding the evolution of insect pheromones (chemical communication cues).  Her work utilizes the Drosophila fly as a model system because of its spectacular biodiversity, quantifiable behaviors, and availability of genetic tools.  Dr. Yew has developed advanced mass spectrometry-based tools to characterize lipid pheromones elaborated by Drosophila.  Her major interests are: 1) characterize the biodiversity of pheromones and to understand the function and biochemical production of lipid pheromones amongst Drosophila species, including the native Hawaiian Drosophila; 2) elucidate the cellular and molecular mechanisms underlying pheromone detection and behavior; and 3) develop improved mass spectrometry-based methods to characterize lipid structures and detect pheromones from intact insects.  Dr. Yew welcomes collaborations with researchers interested in mass spectrometry instrumentation, organic synthesis, chemical ecology of other organisms, and ecology and evolution.

Dr. McFall-Ngai’s laboratories are located at the Kewalo Marine Laboratory in Kakaako.  Her research program has training experiences in both organismal and molecular biology to develop two major focuses: 1) host-bacterial symbiosis; and, 2) the “design” of tissues that interact with light.  The experimental strategy for both areas of research relies on methods that have been developed for the study of the association of the Hawaiian bobtail squid, Euprymna scolopes with the bacterium Vibrio fischeri over the past 25+ years.  In addition, Dr. McFall-Ngai has a continuing interest in the history and development of the field of microbial symbiosis and its impact on biology.  A focused effort in this area promises to drive an unprecedented integration across biology as a whole, which will revolutionize the way we think about all aspects of the biosphere.

Dr. McFall-Ngai’s studies have centered on the development of the squid-vibrio association as a model for the establishment and maintenance of the chronic colonization of animal epithelia by gram-negative bacteria.  This model system is simple, i.e., one host and one microbial species, and both partners can be cultured independently under laboratory conditions.  It permits the dissection of the animal-bacterial partnership with unparalleled precision and this association is one of the few in which the events of symbiosis can be studied under relatively natural conditions.

Using this model, her laboratory has explored the most critical questions about the phenomenon of beneficial animal-microbe associations:
1) How does the animal harvest the often rare symbiont from the environment upon birth or hatching?
2) How do the host and symbiont recognize one another?
3) How does the bacterial partner influence the developmental program of the host?
4) How is stability achieved and maintained in the mature association?
5) What are the principal differences between how an animal interacts with pathogenic
bacterial species and beneficial ones?

A general principle emerging from Dr. McFall-Ngai’s studies has been the finding that in all aspects, from the onset of the association through its maturation, the themes typically associated with bacterial pathogenesis are recurrent.  Specifically, hallmarks of pathogenesis dominate each stage of the symbiosis, from the cell to the molecular biology.  Because biologists are now recognizing that beneficial symbioses are far more prevalent than pathogenesis, it is likely that most pathogens subvert a pre-existing dialogue that host animals have with their beneficial microbial partners.

In a secondary research focus, Dr. McFall-Ngai has studied the “design” of tissues that interact with light.  The symbioses that she has studied have revealed that evolutionary tinkering has led to the formation of an organ that bears remarkable similarity to the eye, with cornea, lens, choroid, iris, and tapetum analogues.  The principal difference is the presence of photoreceptive tissue in the eye (the retina) and photogenic tissue in the light organ (the epithelium harboring luminous bacteria) of the squid.  Dr. McFall-Ngai has studied this convergence at the biochemical and molecular levels and found that it extends beyond the morphology of the organs.  The eye and light organ share many proteins to modulate light, and recently she reported that the light organ expresses the principal proteins of the visual transduction cascade and itself responds physiologically to light stimulus.  These data suggested that the light organ has the molecular, biochemical and physiological potential to behave as a second “eye”.  Currently, Dr. McFall-Ngai is studying the developmental specification of the eye and light organ to determine whether the embryogenesis of these two organs is under the same inductive forces.  Thus far, she has found that at least one isoform of each of the eye specification genes, pax6, eya, six and dachshund, is expressed in the postembryonic light organ.

Dr. Ruby’s laboratories are also at the Kewalo Marine Laboratory.  Dr. Ruby’s research aims to define the behavioral, physiological and molecular events that characterize the bacterial colonization of animal epithelial tissue, and the long term maintenance of the association.  This will be accomplished by 1) determining how specificity is achieved in an environmentally transmitted bacteria-host association; 2) identifying aspects of bacterial motility and chemotaxis that are essential to tissue tropism; 3) characterizing the molecular mechanisms that underlie successful tissue colonization; 4) defining the spatial patterns and temporal dynamics of non-clonal bacterial populations within a monospecific association; and, 5) determining the suite of changes in gene expression that are induced in a bacterium during habitat transition.

Dr. Ruby also studies the symbiotic association of the light-emitting organ of the Hawaiian bobtail squid, Euprymna scolopes, by the luminous bacterium Vibrio fischeri.  His recent investigations have centered on the events characterizing the initiation, colonization, and persistence of the symbiotic infection in newly hatched juvenile squids using bacterial mutants to manipulate, assay and observe the results of the complex program of signaling and responses through which the host and bacterium communicate.  Recently, Dr. Ruby has examined the molecular genetics in V. fischeri, created transposon mutant libraries, and sequenced the genomes of dozens of light-organ and environmental isolates of V. fischeri.  Dr. Ruby is also employing fluorescently labeled V. fischeri to examine its chemotaxis and motility during the initiation and development of symbiosis in living squid cells by confocal and STEM microscopy.  Dr. Ruby aims to identify the genome-wide changes in gene expression that accompany these events by collaborating with engineers and bioinformaticians to develop an instrument that performs single bacterial-cell transcriptomics.  Finally, using squid culturing techniques, Dr. Ruby has begun to examine the responses of the symbiosis to long-term colonization by specific mutants of V. fischeri, or by mixtures of different strains of symbionts, in order to determine the colonization dynamics of the association.