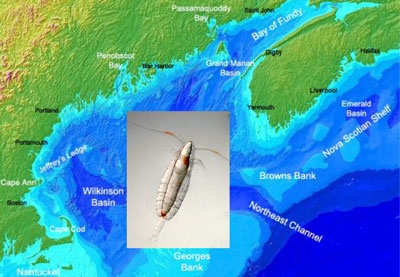 Perhaps if your name is Rip van Winkle you are not aware that the cod are gone.  Not so for the towns and cities of New England and Atlantic Canada for which this and other fisheries have been the mainstay of the economy for hundreds of years.  But recently, the mega decline in cod and other fisheries across the North Atlantic Ocean has threatened the livelihood of fishermen and communities alike.  One suspect in the disappearance of cod and other groundfish is the food source for their young, a planktonic copepod crustacean, no larger than a grain of rice.  Recent changes in local copepod populations have co-occurred with declines in fisheries elsewhere, for example the collapse of the cod fishery in Europe’s North Sea.

For this and other reasons, scientists are currently working to understand how copepods are responding to global climate change, including to increases in water temperature, altered ocean currents and ocean acidification.  Because of the copepod’s small size and its vast 3-dimensional habitat, it is a poor subject for conventional physiological studies.  New molecular techniques have opened doors for an alternative approach to studying physiology.  Known as transcriptomics, this technique makes a catalog of all the messages (“transcripts”) produced by the cells that control the animal’s physiology.  With this tool, biologists are now able to listen in on the instructions being sent out directing an organism’s response to its changing environment.  With respect to copepods, the challenge is to identify and understand each message, in order to track down the causes of population changes.

The first transcriptome for the key North Atlantic copepod Calanus finmarchicus has now been published and made available for scientists everywhere.  Appearing in the latest issue of the open-access journal PLoS ONE, it is the work of a team of scientists from the Pacific Biosciences Research Center at the University of Hawaiʻi at Mānoa, Ohio University and Indiana University’s National Center for Genome Analysis Support.  Mount Desert Island Biological Laboratory in Salisbury Cove, Maine provided access to the biological samples. The transcriptome was sequenced by the University of Georgia Genomics Facility in Athens, Georgia.

Their publication, "De Novo Assembly of a Transcriptome for Calanus finmarchicus (Crustacea, Copepoda) – The Dominant Zooplankter of the North Atlantic Ocean", provides the first publicly accessible, large-scale molecular resource for investigating the physiological ecology of Calanus.  Other highlights of this study include: 1) the observation that a large percentage of genes are not in play at any particular time while a young copepod matures; 2) discovery of specific messages being sent out as individuals prepare to enter a critical dormant phase in their annual population cycle; and 3) the discovery of a number of previously unknown genes, suggesting a more complex biology than what has been found for related animals (fruit fly and water flea) used extensively for biomedical and ecotoxicologial research.

With the Calanus transcriptome in hand, scientist now have a tool to better understand how copepods adapt to environmental change, and when Rip van Winkle awakens, they may be able to predict when and where population changes will occur for this critical planktonic crustacean on which many fisheries depend.

Several presentations describing or using this new resource will be presented at the 2014 Ocean Sciences Meeting being held February 23rd - 28th at the Honolulu Convention Center, Honolulu, Hawaii.