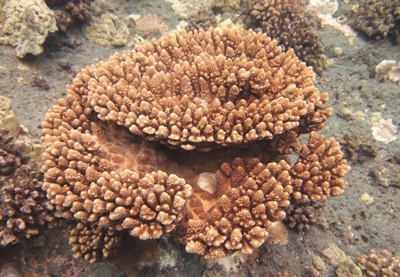 Colony of Acropora gemmifera. (Photo from Department of Land and Natural Resources).

A species of coral never before seen around the main Hawaiian Islands has been discovered off the South Kona coast by a research team from the DLNR Division of Aquatic Resources.  Based on colony morphology and color, the researchers tentatively identified the new coral as Acropora gemmifera, a species of coral found in Australia, the Indo-Pacific, the central and western Pacific, and Johnston Atoll.  Kewalo Marine Lab researcher, Narrissa Spies in the Richmond Lab, assisted DLNR by confirming the species identity through DNA sequencing.  This is the first record of any species of Acropora found in Hawaiʻi, and researchers suspect it may have arrived in Hawaiʻi via currents from Johnston Atoll.