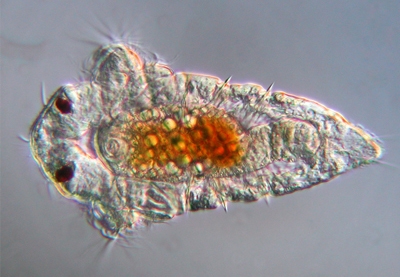 Marine biofouling, in which marine organisms such as barnacles, mussels, and tubeworms attach to the exposed surfaces of boats and other structures, is a widespread, and economically significant problem affecting marine industries, including commercial shipping and military vessels.  The presence of layers of such fouling organisms on the underside of ships is a costly problem - it increases drag, increases fuel consumption, and increases maintenance costs.

Biofouling organisms begin life as small, floating larvae, which drift with currents until they find a suitable surface upon which to settle.  Dr. Michael Hadfield, Professor of Biology at Kewalo Marine Laboratory, and his lab have been studying the cues and process of settlement and metamorphosis in the marine tubeworm, Hydroides elegans, for more than 20 years.

"The critical issue is how they find the right spot to make that transformation: the right place where food will be available and where there will be other of the species with which to reproduce," Hadfield told Kaunānā, the Research Publication of the University of Hawai'i.  "The success of the species depends on the larvae settling in on exactly the right spot."

That "right spot", it turns out, is determined by specific bacterial cues provided by biofilms, thin layers of bacteria that coat surfaces in contact with water.  Hadfield and his colleagues had previously shown that the bacterium Pseudoalteromonas luteoviolacea influenced metamorphosis of H. elegans, and identified and characterized through mutational analyses a set of genes essential for the induction process.  The specific cue by which  P. luteoviolacea induces metamorphosis, however, remained unknown.

Working from the previously identified genes shown to be required for H. elegans metamorphosis, Hadfield and collaborators from the California Institute of Technology, identified additional genes involved in the bacterial-animal interaction that initiates the settlement process in H. elegans.  The results of their research, "Marine tubeworm metamorphosis induced by arrays of bacterial phage tail-like structures", were published in the January 31, 2014 issue of Science.  Lead author, Nicholas Shikuma, a post-doctoral scholar at CalTech, worked with Hadfield at Kewalo Marine Lab and completed his masters degree at UH Mānoa.

Shikuma et al. identified a cluster of additional genes in P. luteoviolacea, which they named metamorphosis-associated contractile structure (MACs) genes, that encode the components of a contractile phage tail-like structure, which is typically used by bacteria to kill other bacteria.  Through deletion mutagenesis experiments, the researchers demonstrated that these MAC genes were required to induce metamorphosis in H. elegans.  The researchers also showed that the phage tail-like structures are assembled intracellularly then, after bacterial lysis, are organized into a large and structurally elaborate extracellular array, which triggers metamorphosis in the tubeworm.

"This bacterium-tubeworm interaction is the first account of an interaction mediated by a phage tail-like structure that's beneficial," Shikuma told The Scientist.  "We've found that these MAC genes have homologues in other bacteria and those homologues actually cause virulence in insects, but in this case the bacteria actually help the tubeworm find a suitable place to metamorphose."

The researchers have yet to understand specifically how the larvae and bacteria interact and exactly how the MACs actually induce metamorphosis, but these recent findings provide a place to start for developing anti-fouling methods that will directly target the process of larval settlement.