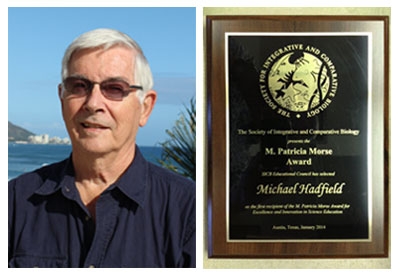 Dr. Michael Hadfield of Kewalo Marine Laboratory was recently honored as the first recipient of the M. Patricia Morse Award by the Society for Integrative and Comparative Biology (SICB) at their annual meeting on January 3-7 in Austin, Texas.

Dr. Hadfield was recognized for his significant contributions two training programs, funded by the National Science Foundation, aimed at increasing scientific training for students and educators in the Pacific Island nations.  The first program provides training for Pacific Island students through summer and year-round internships at the University of Hawaiʻi, funded by NSF grants to the Undergraduate Mentoring in Environmental Biology (UMEB) program, the Undergraduate Research Mentoring (URM) program, and the Centers for Ocean Sciences Education Excellence (COSEE).  The second training program with which Hadfield has been involved provides summer training workshops for Pacific Islands community college instructors, and is funded by NSF grants to URM and COSEE.

From the SICB official announcement:

"The SICB Educational Council has selected Mike Hadfield from the University of Hawaii as the first recipient of the M. Patricia Morse Award for Excellence and Innovation in Science Education.  Mike is Professor of Biology at the University of Hawaii, where he served for 11 years as Director of the Kewalo Marine Laboratory and has had a long running research program focused on the settlement and metamorphosis of marine invertebrates.  Mike is a venerated member of SICB, including having served as President in 1995-1996 during its transition in name from the American Society of Zoologists.  With this award, Mike is being recognized principally for his initiation of and contributions to two major programs, one that has recruited and supported students from Pacific Island communities to come to the University of Hawaii for research experience, and a second that has provided science training to teachers from community colleges throughout the Pacific Islands.  These innovative projects have had far-reaching impacts on the education of underserved students and teachers and, ultimately, on Pacific Island biology and conservation.  Upon hearing of the selection, Trish Morse remarked, 'This is VERY exciting for me. Mike has done amazing things in the many islands, bringing native people into the mainstream and giving SO many people confidence.  And that is beyond his wonderful string of graduate students, postdocs etc. as well as colleagues working with him on research - what a wonderful choice.'  Congratulations and thanks to Mike for his diverse achievements in science education!"