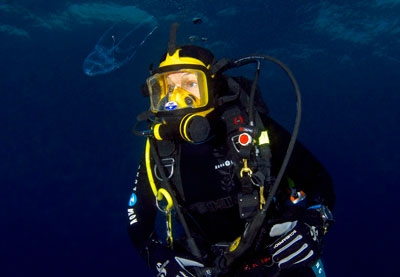 PBRC researchers Luciano Chiaverano, Angel Yanagihara, and Brenden Holland recently published their research article investigating the long-term trends in abundance of box jellyfish and its correlation with environmental variability in the open-access journal PLOS One.

Their study, which expanded on jellyfish beach count efforts initiated by Honolulu lifeguard Landy Blair in the 1980s, includes data collected over 14 years, from January 1998 to December 2011, and represents the longest continual-time series census of box jellyfish in the world.  Yanagihara, Director of the Pacific Cnidaria Research Lab and senior author of the new article, began the collection effort in 1998, with support from the Hawaiʻi Community Foundation and the National Institutes of Health.

"My lab staff and I have collected box jellyfish from Waikīkī Beach every lunar month for 14 years, and this unbroken, monthly data set represents over 6000 hours of labor," said Yanagihara.

Locals and tourists alike are well aware of the monthly influx of the highly venomous box jellyfish, Alatina moseri, on the shores of Waikīkī Beach, which occurs 8-12 days after the full moon.  The threat of their painful stings has often caused the closure of a popular Hawaiʻi snorkeling spot, and has sent unsuspecting swimmers to the hospital for treatment.   Although it has been known for years that their appearance is predictably timed with the lunar cycle, the cause of the dramatic variation in aggregation sizes among months and among years was unknown.

In their analyses, the researchers were able to identify an oscillating pattern of increased and decreased abundance of box jellyfish with a period of approximately four years.  They also found significant, positive relationships between box jellyfish aggregation size and the North Pacific Gyre Oscillation (NPGO) index (an index of water mass movement), primary production, and small zooplankton abundance.

The authors concluded that the number of box jellyfish appearing on Waikīkī beach is controlled by "bottom-up" processes, in which increased transport of nutrient-rich waters from the North Pacific (as measured by the NPGO index) to the Hawaiian Islands boosts primary production in local waters, in turn increasing zooplankton abundance - a food source for the box jellyfish.

The ability to predict changes in jellyfish abundance over time would provide valuable information to water safety personnel and beach-goers, but it is a challenging task given sampling difficulties, lack of historical data, and the characteristics of the jellyfish lifecycle.  The results of this study, however, may begin to address some of those challenges.

"The analytic approach presented in this paper offers tools with predictive power that can be used to forecast severity of box jellyfish influx along this popular stretch of beach", said Holland.

Their research article appears in the October 23, 2013 issue of PLOS One.