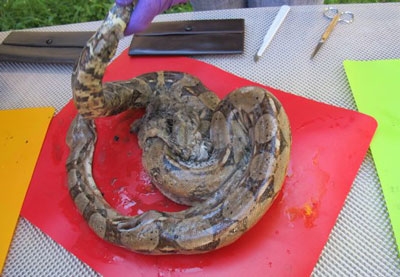 The Holland Lab at PBRC received and dissected the dead Boa constrictor that was reported to and picked up by the Hawaiʻi Department of Agriculture (HDOA) on the Pali Highway in recent weeks.  The frozen carcass was provided to PBRC's Hawaiian Tree Snail Conservation Lab (HTSCL) by the HDOA Plant Quarantine Facility. Dr. Brenden Holland and his doctoral student Melissa Wright received a grant this year to evaluate threats to native snails posed by the more than 30 established species of invasive reptiles and frogs. HTSCL students and UH Biology graduate students performed the necropsy, including gut content analysis and determination of gender and reproductive status.  Questions regarding what the snake had eaten recently and whether it had given birth are of potential importance in determining whether this invasive reptile was a recent pet release or is something that has become established in the dense forests in that area, and has simply not yet been detected. 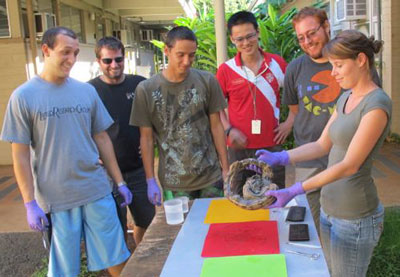 Dr. Holland's priorities were to investigate whether the snake's last meal might have included local wildlife, especially native species.  Pet constrictors are usually fed a diet of commercially available rodents, which usually have diagnostic white fur, unlike that of wild mice or rats.  But this species of snake is opportunistic and adaptable, and will eat a variety of prey species in the wild. Dr. Holland and his students were also interested in whether the snake was a female, and if so, if it was pregnant at the time of death, or if it had recently given birth.

The necropsy revealed that the snake was a mature male, and that the stomach content included brown mammalian fur, plus a few partially digested small bone fragments, some black lava pebbles, and a small amount of plant material (bark and a seed pod), probably ingested accidentally. Dr. Holland and his group will send the fur to a mammal lab at the USGS on the mainland for positive species identification.

At this time, they were unable to conclusively determine whether this was a recent pet release or a member of an undetected, established population in Nuʻuanu Valley. Dr. Holland hopes to be able to determine the species of rodent that the snake recently consumed.  It is asked that the public keep vigilant, and report any snake sightings to the appropriate authorities.

To report a sighting of a snake or any illegal animal, please call the state’s toll-free PEST HOTLINE at 643-PEST (7378)