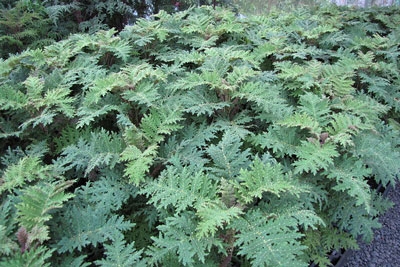 Conservation efforts with Cyanea horrida, also known by its Hawaiian name holokea, by the Olinda Rare Plant Propagation Facility was recently featured in an article published in ARKive – Conservation in Action.  The Olinda Rare Plant Propagation Facility, administered by the Pacific Biosciences Research Center (PBRC) and operated by Anna Palomino, a research horticulturalist in the Center for Conservation Research and Training, has been successful in propagating Cyanea horrida from seeds collected from the wild population. This species, a palm-like tree of the Bellflower family, is found only on the island of Maui, is extremely rare, and is classified as “Critically Endangered” on the IUCN Red List.  It is known from fewer than a hundred individual plants remaining in the wild.

State and Federal agencies involved in the protection of Threatened and Endangered (T&E) species in Hawaii have partnered with PBRC in propagating T&E species at its Olinda (Maui) and Volcano (Big Island) Rare Plant Propagation Facilities with much success.  Seedlings of several T&E species, which have been propagated at both facilities, have been successfully out-planted into the native Hawaiian habitats where these species have been known to occur, once threats have been eliminated.